was published. Her work was a reflection of the grief process of patients who had been diagnosed with terminal illness. These stages later came to be applied to other forms of significant loss.

In her final book On Grief and Grieving

Elizabeth Kubler-Ross comments on how the grief stages were very misunderstood in the three decades between books. She says, "They were never meant to tuck messy emotions into neat packages. They are responses to loss that many people have, but there is not a typical response to loss, as there is no typical loss. (27)"

She says these stages are tools to help us frame and identify what we may be feeling as a result of various losses in our lives. They are not stops on a linear timeline and not everyone goes through all of them. Here are the Kubler Ross stages of grief:

For those who have received a diagnosis of a terminal illness, this is the initial reaction to hearing the devastating news. It is a natural defense mechanism as you are being forced to absorb the unthinkable.

For those who have lost a loved one, the denial stage is more symbolic. You know mentally that your loved one has died, but you just can't believe it. You simply can't fathom that they will never walk through the door again.

"I can't believe she is dead."

The denial stage is the psyche's protective mechanism. It helps us absorb the tragic news at a slower rate so we are not completely overwhelmed by it.

Rage and resentment replace denial as the full impact of the diagnosis begins to sink in.

"This isn't fair. I didn't do anything to deserve this."

The person tries to bargain with God or a Higher Power in order to gain a longer life.

"Just let me live long enough to see my grandchild's birth." "I'll do anything if you give me a few more years."

In this stage the person gives up on bargaining and realizes that death is coming. It is a sad and difficult time when the person may refuse to enter into the life they have left. They must be allowed this time to mourn.

"I'm going to die, so why bother trying to live."

The person comes to realizes death is coming and is now able to find some measure of peace with the process.

"Death is coming, but I will be okay."

As I reflect on the Kubler Ross stages of grief, I wonder if part of the reason "Tuesdays with Morrie" became such a popular book is that it showed us someone living this journey. For much of the book we see Morrie as the teacher who is in the place of acceptance, yet we clearly see elements of his struggle though the other stages as well.

I just received an email from a friend who has been living through a battle with lymphoma. Her friends and family are celebrating that as of her last medical exams, she is cancer free. But she writes beautifully of what she has learned on her difficult journey.

"I've always been reflective, yet illness invited me to go deeper still. I discovered there remained in me a restless part, a fear I may be missing something. Recovering from lymphoma showed me what I was missing: not activity, health, productivity or experiencing it all, but each moment's depth, flavor, subtlety, grace, and beauty. I've learned to sink into bottomless love and joy, and in that place, even sorrow sings when it's too deep for tears." Sharon Landis

If you are looking to get a feel of grief from a less linear fashion, you may appreciate listening to the following audio book. The various emotions of grief are clearly evident, but I would not call my story one that stuck simply to anyone's set of grief stages. 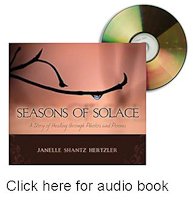 If you found this article on the Kubler Ross stages of grief helpful, you might also like this book review on On Grief and Grieving or this article on healthy bereavement.