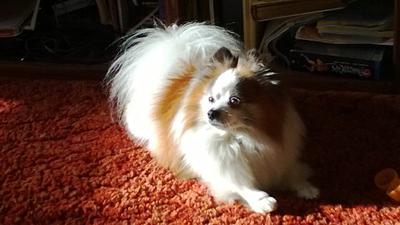 Honoring your special life is the least I can do...Zorro came into my life 10 years ago...as a puppy, his breeder brought in the litters of puppies to visit her grandmother who resided in the skilled nursing facility where I worked as the Assistant Director of Nursing. The breeders grandmother would place the puppies on her lap, then take them to visit the other residents in her wheelchair. She would go up & down the halls, the other residents loved the visit time. One day, during a visit, there was just one puppy, Zorro. The resident's grand daughter informed me that Zorro was the only puppy left. I notice how quiet & observant he was, with all the buzzers, walkers, and wheelchairs, he did not seem to be bothered by them.The residents grand daughter told me he was for sale...I bought him on the spot. He came to work with me everyday since. If it was the middle of the night, Zorro was there. The chaplain would take him on rounds with her, she would come back with many stories of his "kind of medicine".There are so many stories of his love and joy he would bring not only to residents, but staff as well. He seemed to know exactly what was needed. One day, the grandmother of the breeder I purchased Zorro from, came down the hallway in her wheelchair visibly upset & crying. Zorro & I were at the nurse's station. Zorro immediately went to her, jump up up onto her lap gently and placed a paw on her cheek and began licking her tears away. She began to calm down so I could determine what was wrong.MaMa1(that is what we called her because she was Zorro's first "mom")pat Zorro & hugged him. My friend was so much more than "a dog" he was an angel. He was tragically struck by a car and died in mt arms. I miss him terribly...the joy & love he brought into my life and others...I can only try to honor him so that his beautiful little life is not forgotten.