Dinner with Sarah (finding out things) 6-30 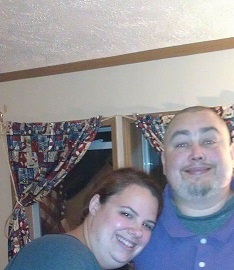 Sarah with Michael his 40th BIRTHDAY

Last night Sarah and I met for dinner. It was good to see her, but I was having anxiety waiting for her. Not knowing how she would be or how I would be, hoping we wouldn't cry.
She seems to be wanting to move on, making some decisions like moving to an apartment asking Chip if he wants Athena. It is to much for her to take care of. She isn't going to be able to afford the house and manage the upkeep on it. My heart breaks for her, but she also told me things that I wish I knew sooner or not at all. The last 2 years they were more friends, not like 2 people getting married. No intimacy, He didn't want physical contact at all. Sarah said they were closer at the hospital then before. So strange. She said Michael was her best friend and they talked about everything but why get married? More unanswered questions. He knew he was sick He had to know! It makes sense to me why he was crying, why he asked me questions about things he had done in his past. Because He was trying to prepare Himself. But why was he so damn stubborn! Why didn't he just go to the Doctors 2 years ago? In his mind did he really think it would just go away? On the outside He was getting closer to his family but on the inside he was frightened and He would rather not know. Oh my poor baby I wish I could have taken away his torment eased the pain just a little. He wanted finally to have a wife and a family or did he? So many unanswered questions that maybe one day I will know. If I don't I need to learn to let go of them and go on....... I sit here holding back the tears wishing I could do something, knowing there is nothing but grieve for the what why how.

Join in and write your own page! It's easy to do. How? Simply click here to return to Your story.